In the United States, employers are under no legal obligation to provide employees with paid sick or maternity leave. President Obama wants to change that. Last week, the President urged Congress to pass the Healthy Families Act, which would require employers to provide employees with paid sick leave. The President also granted six weeks of paid maternity leave to all federal employees, and urged Congress to pass a law requiring employers nationwide to do so.

The Healthy Families Act was introduced into the House of Representatives nearly two years ago, but has languished due to Republican opposition. The Act would require employers with at least 15 part and full-time employees to provide them with 1 hour of paid sick leave for every 30 hours worked. Employees could earn up to a maximum of 56 hours of paid sick leave annually. The sick leave could be used to attend to the employee’s medical needs, the medical needs of close family members (including domestic partners), and to seek medical attention or take legal action due to domestic violence, sexual assault, or stalking.

The President argued that the Act would actually increase productivity, as sick workers would be more likely to stay home and thereby not infect their co-workers. Opponents, however, have argued that any law that encourages employees to stay home will decrease productivity, as it means that employees will be working less. They have also argued that the Act will increase the cost of labor, which may lead to lower wage increases and less hiring.

Last Thursday, the President also signed a presidential memorandum directing federal agencies to allow employees to take six weeks of advanced paid sick leave to care for a new child or a sick family member. Employees may take this leave even if they have just been hired. The President called on Congress to pass a law extending these benefits to the rest of the country. He also proposed using more than $2 billion of federal funds to encourage states to adopt paid family and medical leave programs.

Requiring employers to provide employees with paid sick leave may not dramatically affect the workplace, as 61% of workers currently receive paid sick leave, according to the Bureau of Labor Statistics. However, paid maternity leave may have a significant effect, as only 12% of workers currently receive it, according to the Bureau. Paid maternity leave is common in other countries. The table below lists weeks of paid maternity leave mandated by law in other developed countries, along with the percentage of pay a mother will receive during this leave: 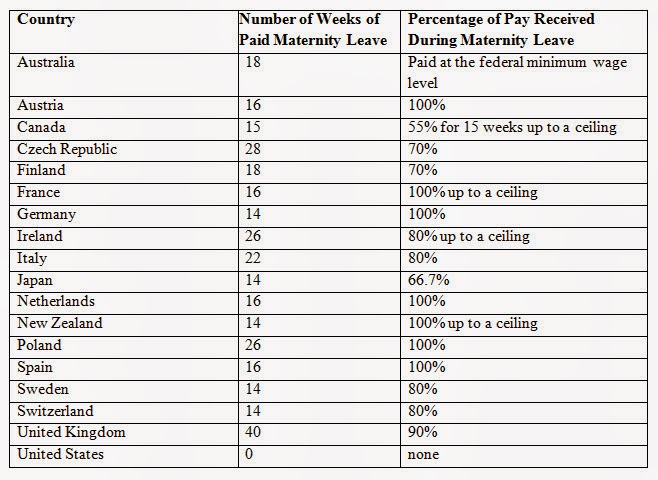