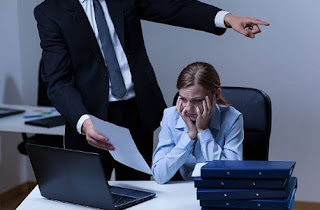 I had one short tempered boss a long time ago who would invariably react to anything he didn’t like or thought that he wouldn’t like by immediately screaming at the top of his lungs. Here’s an example. My office was situated close to his. The building management was doing some work in the offices and early one morning was working in mine. Apparently the workers were playing music, rather loudly, while they worked. Later that day, when I arrived at work, my boss called me into his office and began yelling (and when he yelled-which was often-most of the floor could hear him) that I was so inconsiderate to play my music so loud and who did I think I was and I disturbed him while he was trying to work. It was quite a while before I pieced together what happened and when I had the opportunity to respond, I offered my explanation. He stopped, stared at me and told me to make sure it never happened again. This was the same boss who, when he was mad at you, would exclude you from team meetings and give you the “silent treatment”. He was a nightmare of a boss. Fortunately, most employers recognize now that those ways are detrimental not only for the individual but the organization as a whole. An ever increasing number of workplaces now proactively address bullying.

Workplace bullying is a reality that employers cannot afford to ignore. The negative effects of workplace bullying can result in reduced profitability, low morale, increased absenteeism, and staff turnover. In addition, employers may also be exposed to legal consequences and other penalties resulting from workplace bullying. Despite this reality, many employers are unaware of their responsibilities in this area.

What is Workplace Bullying?

Section 55A (1) of the Occupational Health, Safety and Welfare Act of 1986, includes the following definition:

Workplace bullying means any behavior that is repeated, systematic and directed towards an employee or group of employees that a reasonable person, having regard to the circumstances, would expect to victimize, humiliate, undermine or threaten and which creates a risk to health and safety.

The Act defines “repeated” as the persistent or ongoing nature of the behavior and can refer to a range of different types of behavior over time.
The Act defines “systematic” as having, showing or involving a method or plan. Whether behavior is systematic or not will depend on an analysis of the circumstances of each individual case with this general guideline in mind.
The term “risk to health and safety” includes the risk to the emotional, mental or physical health of  employees in the workplace.

Bullying behavior in the workplace includes:
Workplace bulling can also be more subtle and may include the following behaviors:
Look for Workplace Bullying - Part II for a discussion of best practices  for employers to identify , correct and prevent bullying in the workplace.